The Many Adventures of Our Hens and Chicks 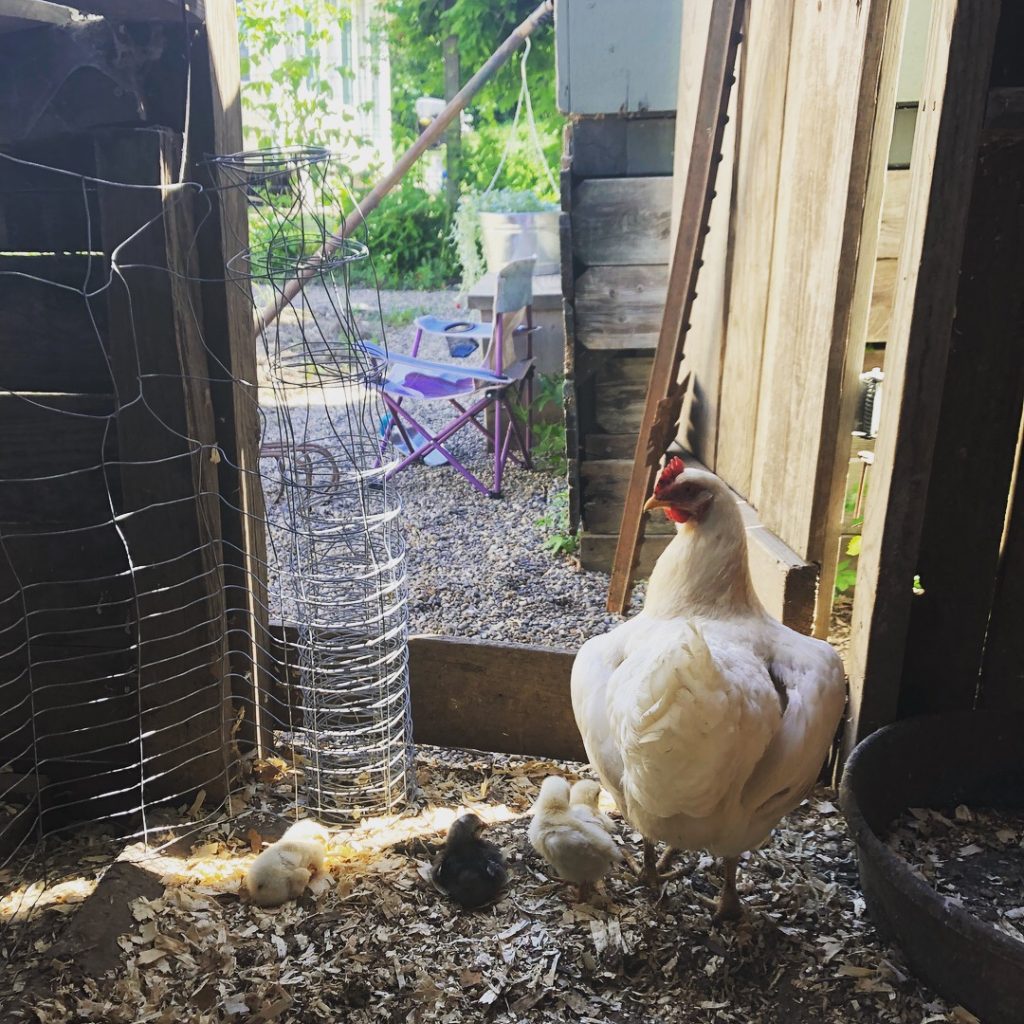 Mama hens hatching and raising a brood of chicks. What could more perfectly capture the dreamy homestead life?

Our “feels like” temperatures have been consistently around 100. The coop is even hotter, more humid, and more full of bugs than the miserable outdoors, and it stinks in there no matter how clean you try to keep it! Our coop isn’t tall enough for an adult to stand in. Just imagine all of these details as you read our drama below. I haven’t included the parts where I bash my head on a cross beam or duck from the wasps trying make the coop their home, too.

*Disclaimer: I’m not new to letting broody hens hatch chicks! We had plenty of broodies and chicks years ago in our last homestead and we never had these problems.

We’ve had a surplus of eggs so we didn’t mind when four of the hens became broody over the course of a week. However, soon we weren’t getting any eggs for ourselves and we realized our broodies were sitting on WAY too many eggs. Each hen had something like twenty-plus eggs! As their full-time broody hormones kicked in they would leave the nest multiple times per day and other hens would jump on their nests and lay fresh eggs for them.

Once the broodies took up full-time nest sitting, the rest of the hens decided to lay somewhere else on the property. We still have no clue where all the eggs are, except we just discovered about forty eggs that are who knows how old and rotting away in the back corner of an old chicken run/trash pile that we can’t get to! Seriously, at this point I have no idea what to do about those.

Lesson learned: Control your broody hens’ clutches of eggs by marking the ones they get to keep (no more than 7 seems reasonable) and collecting (stealing) the fresh ones daily. 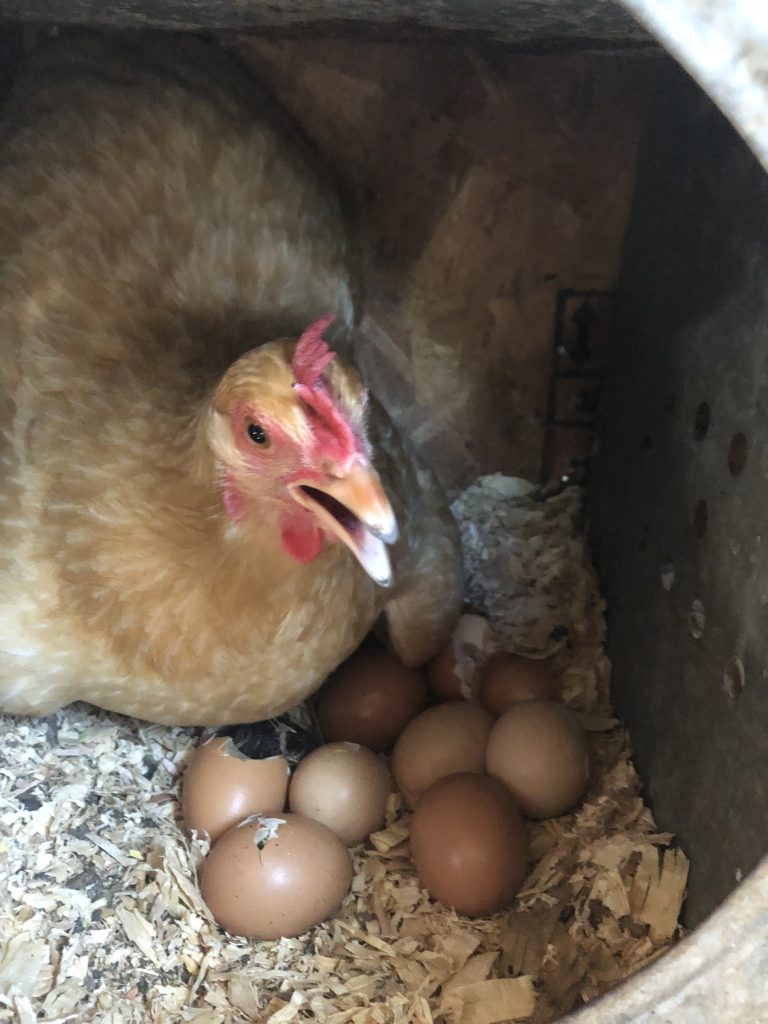 Wait, what?! They switched moms?!

Later that day we checked again and Whitey apparently secured her role as the rightful mama of the nest and new chicks…including one newly hatched chick she had flattened into a pancake under her fat feet! This poor dead chick smelled up everyone and everything in that nest like rotting death!

Next the Rhode Island red mama, who we call “Evil Red”, hatched a couple chicks. She’s called Evil Red because she is evil. Last year we saw her attack a fox that was attacking another hen. We think the rooster had already fled the scene. If you get within a foot of her nest or chicks she manages to peck the life out of you like a machine gun.

Evil Red hatched a couple chicks and they were so cute. Yet she seemed frantic, not knowing exactly what to do about the chicks and preferring to stick with egg sitting. We checked on her the next morning and she was out of the nest with one of her new chicks dead and stuck to her- dangling as she ran around the coop!

(Just ponder what that looked like for a moment. Seriously. Imagine what went through my mind as I entered the coop expecting to see cute fluffy chicks and I see that instead!)

Meanwhile the other two golden mamas, “Goldie” and “Buffie”, were in and out of their nests, clearly lacking the commitment necessary to successfully hatch a brood. Whitey and Evil Red kept jumping into those nests of eggs, abandoning their own chicks on the ground and preferring to sit on eggs instead.

Is anyone going to become a mom here?! 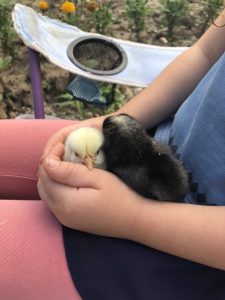 Over the next couple days, a couple more chicks came and the drama continued. In addition to the dead chicks I’ve already mentioned, we had half-hatched chicks that didn’t make it because the mamas either tried to eat them or just smashed them, eggs that we tried to move but Evil Red pecked us so violently that we dropped them and they exploded- revealing the most rotten and rancid smells nature is capable of producing. And we got a deformed chick.

“Survivor”, the deformed chick, is currently still alive against all odds. This little guy was one of Evil Red’s first chicks and she didn’t know what to do with it, . Of course my girls came to the rescue and brought the chick in the house to raise it.

Survivor has a twisted neck, twisted beak, uneven legs, a half-opened eye and a butt on the side of it’s body (which we discovered when it squirted poop at us from the strangest angle). It spent its first couple nights convulsing and dying in its box before I went to bed. As sad as that was, I felt relief that nature was taking its course. Except each morning I would get up and the chick was alive and well again!

Over the last week Survivor has become stronger and more normal. I decided to secretly add him to one of the mama hens’ nests because the purpose of all of this broody hen hatching drama was that I was NOT going to hand raise chicks right now! I’m not sure if Survivor will make it but we’ve given him the best chance possible.

Time To Candle These Eggs and Get Control of This!

After dealing with too many eggs, dead chicks, confused mamas and all the daily coop drama, it was time to take control.

We collected every egg, one nest at a time, and brought them into the house to candle them. (Candling is where you use a flashlight in a dark room to look into the egg and see how developed they are, if at all.)

We organized the eggs into duds (no development), barely developed, halfway developed and fully developed/likely to hatch in the next couple days. More than half of these eggs were duds and we had to trash them. 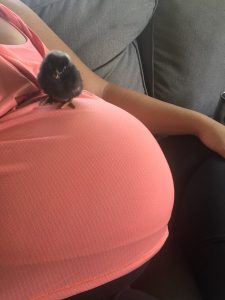 Whitey didn’t get any eggs back. We forced her to become the mom of the five healthy chicks she had. She has done very well in this role, except one chick that drowned in a rain-filled bowl outside.

Evil Red got all the eggs that were about to hatch. She hatched a good group of chicks and we removed her remaining eggs, forcing her to become a devoted mom as well. She’s doing extremely well in this role, attacking anyone or anything that comes anywhere near her chicks.

One day Goldie hatched all her eggs within a couple hours. We checked on them hourly and finally came out to a nest full of chicks running around…with no mother to be found. Goldie apparently didn’t want to be a mom and didn’t come back for the rest of the day.

The next day we took Goldie’s chicks out (who were still alone) and gave them to Evil Red, which seemed to work pretty well since her haughty and controlling personality lends well to her assuming all chicks are hers. Over the next two days Goldie reappeared in the coop and at this point she and Evil Red seem to be co-parenting all 17 chicks they share. 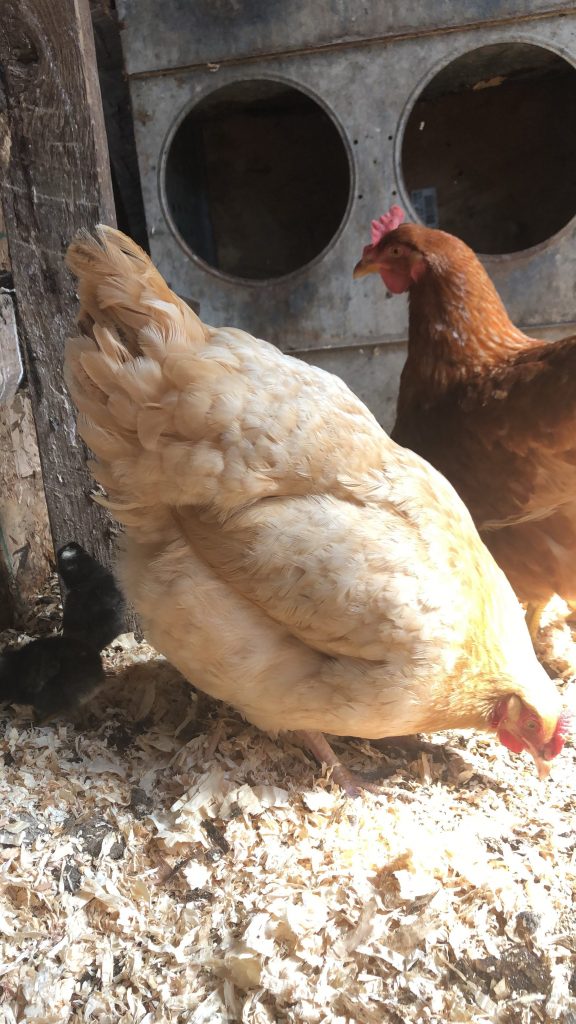 Buffie finally hatched one chick and we snuck Survivor into her nest with it. She seemed to accept Survivor and tucked him under her belly. The next day, however, Buffie was out with her one chick and Survivor was running around on his own.

There was one almost-hatched chick left in her nest that didn’t make it (smashed or pecked to death). Of her remaining eggs, a couple were liquidy and smelly (rotten) and I left the final 3 possibly viable eggs in the nest. I’m not sure if Buffie has any plans to come back, so those three final eggs- possibly filled with mostly grown chicks- may have no chance of survival. Once we determine the destiny of those three remaining eggs this whole drama will finally be over! Hallelujah.

Lesson Learned: Control your broody hens’ clutches of eggs by marking the ones they get to keep (no more than 7 seems reasonable) and collecting the fresh ones daily.

Did I already say that?

I’m not sure if I’ve educated you in any way, or just entertained you with my drama, but don’t let this happen to you!

I know there are many methods of meticulously caring for chickens, broody hens and chicks, but we don’t have the ability at this point to build separate brood coops and stuff. Right now our homestead is more wild and free than perfect. We’re always learning and trying to improve!

This website uses cookies to improve your experience while you navigate through the website. Out of these cookies, the cookies that are categorized as necessary are stored on your browser as they are essential for the working of basic functionalities of the website. We also use third-party cookies that help us analyze and understand how you use this website. These cookies will be stored in your browser only with your consent. You also have the option to opt-out of these cookies. But opting out of some of these cookies may have an effect on your browsing experience.
Necessary Always Enabled
Necessary cookies are absolutely essential for the website to function properly. This category only includes cookies that ensures basic functionalities and security features of the website. These cookies do not store any personal information.
Non-necessary
Any cookies that may not be particularly necessary for the website to function and is used specifically to collect user personal data via analytics, ads, other embedded contents are termed as non-necessary cookies. It is mandatory to procure user consent prior to running these cookies on your website.
SAVE & ACCEPT